A cartesian coordinate system on a plane is chosen by choosing the origin (point O) and axis (two ordered lines perpendicular to each other and meeting at the origin point).

Thus, you can specify any point on a plane by specifying its coordinates, which are distances from the origin to the perpendicular projections of this point to the axis.

The polar coordinate system on a plane is chosen by choosing the original point (pole) and the ray from the pole called the polar axis. 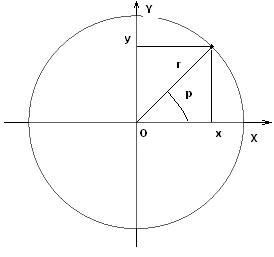 Calculators below convert from polar to cartesian coordinates and vice versa. It is assumed that both systems' origin points are the same, and the polar axis is directed along the positive direction of the x-axis.

Digits after the decimal point: 2
x-coordinate
y-coordinate
URL copied to clipboard

Everyone who receives the link will be able to view this calculation